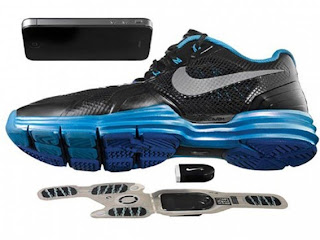 Wearable technology has come a fair way from the early efforts of a pedometer strapped to a running trainer. The new generation personal trainer offers the beginner a free pro-level workout. The new Nike Lunar TR1+ is rather a stand out techy shoe with its electronics powered by apps rather than mere walking. An array of pressure and motion sensors in the Nike Lunar TR1+ soles measured every movement and when combined with workout apps calculates workout efforts and gives bio- feedback. Nike Lunar TR1+ trainers sport several pressure sensors at the heel, ball and toe of the sole. These measure the spread of weight, and the 3-axis accelerometers judge movement. The trainers can be used with the Nike+ Running app but the new app, called the Nike+ Training app, offers a range of workouts to suit novice and elite alike . The removable Bluetooth accelerometers last 40 hours on a charge. Nike intend to release a women’s version called Nike Lunar HyperWorkout+ and a basketball specific shoe called the Nike Hyperdunk+.