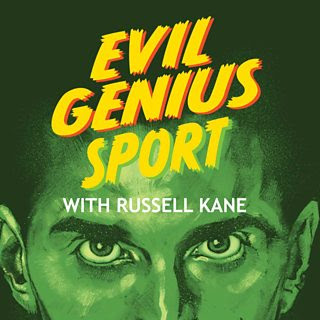 Adi Dassler, founder of Adidas Evil Genius with Russell Kane BBC Sounds. Changing the way we see heroes and villains in history.
Posted by footalk at 11:41 PM No comments:

The Origins of Athletic Sandals

In the ancient games the competitors ran barefoot but as the Greek Empire extended more athletes from colder climates came to race, wearing sandals. At first spectators and barefoot competitors treated shod athletes as a novelty and sign of parochialism. When runners wearing shoes became winners then public opinion changed and sandal wearers were viewed with great suspicion and associated with cheating. Eventually once it was recognized the sole of the sandal increased ground traction and helped the leg propel forward with greater efficiency most athletes adopted the running sandal. 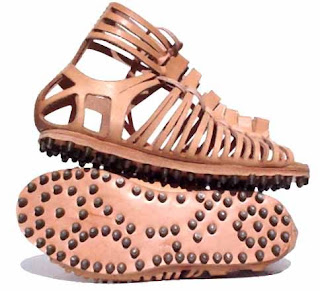 The sole of the sandal needed to be securely attached to the foot and this necessitated leather thongs wrapped to the ankle and sometimes above. Between the Greek and Roman Civilizations during the Bronze Age (3200-600 BCE) a small, almost obscured civilization, known as the Etruscans (768 –264 BCE) developed a technique to attach the sole of the sandal to the upper of the shoe with metal tacks. The Romans stiffened their sandals with tacks to secure the sole to the upper. The more robust footwear was further strengthened with hobnails (or clavata). Prior to this, sandals were flimsy and would break easily but the tacks held the shoes together with vastly improved sole traction to the ground. This simple innovation was the beginning of the running shoe. 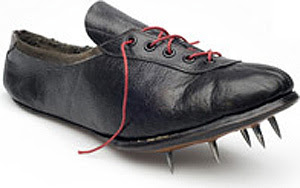 A similar innovation would take place centuries later when spikes were added to running shoes. As new events were added to the Ancient Games, such as chariot racing and archery, then being shod became the norm. 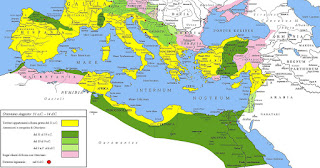 After the Fall of the Roman Empire in the 5th century AD the craft of sandal making was almost lost to the world. Ironically shoe makers on the periphery of the Empire carried on making sandals which kept the craft alive only to be rediscovered centuries later. 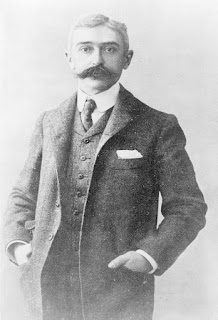 Throughout the Middle Ages sports were played in different cultures but it was the British in the 17th and 18th centuries that kept the Greek traditions of racing in a straight line. As the influence of the British Empire with its concentration on militaria and muscular Christianity permeated throughout Europe and the colonies, many were taken with the idea of competition and fair play. Frenchman, Baron Pierre de Coubertin saw a window of opportunity and wanted to bring trading nations together on the field of athletics. 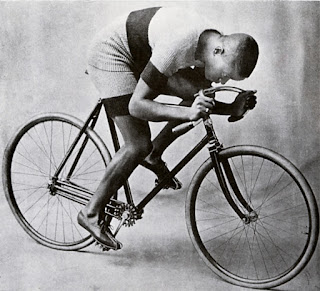 This was a good commercial opportunity for suppliers to manufacture sport's clothing and footwear. At first the choice of footwear was of little importance but the popularity of cycling during the mid 1800s saw a rise in demand for lightweight cycling shoes. Improved machinery meant the cost of mass produced footwear was falling and by the 1880s, no cyclist of repute was not wearing heelless leather shoes with eight or ten eyelets. Long-distance cyclists recognised early that stabilizing the foot on the pedal dramatically improved pedaling efficiency. The big step to develop shoes specific to different sports probably came from shoe makers with individual interest in the discipline. The cycle shoe was easily adapted to running by adding metal spikes. Gradually the spikes grew longer reaching about 2 inches in their heyday. 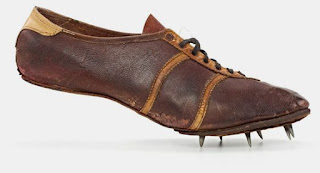 The addition of spikes meant runner could adjust their performance to different condition such wet surfaces or grass or ash. By the 19th century an all leather spiked running shoe was available. Unfortunately these were neither comfortable nor light in weight. Wet conditions meant the shoes got heavier and the leather stretched which left the shoes too big to wear with comfort. The ability to treat leather with synthetic waterproof compounds made significant contribution to sports footwear in general. 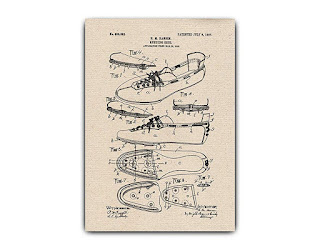 In 1907 shoemakers began stitching separate leather strips around the top of runners to prevent unwanted stretching. The invention of foam rubber improved comfort and eventually inclusion of injected PVC and man-made soles saw the decline of molded rubber shoes. 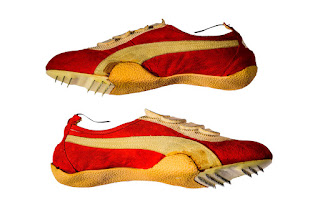 Throughout the 1960s manufacturers experimented with new spike patterns and eventually brush spikes were introduced in 1968. Modern tack shoes began to incorporate tough mesh fabrics into the uppers combined with lightweight synthetic soles and much later new polymer spikes to match the new running tacks. More recently the athletic sandal has made several reappearances and in different guises. 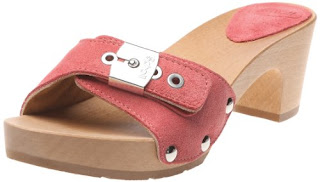 The exercise sandal was very popular during the nineteen sixties and early 70s. It was never very clear weather the shoe 'exercised' the foot by its intrinsic shape, or was the ideal footgear to take exercise in. Shaped like the sole of the foot the shoe combined the properties of a simple sandal with a clog. They remain popular to the present day.

With the introduction of extreme sport such as water rafting, the athletic sandal has been given a new lease of life. The trend was started by entrepreneur, Mark Thatcher, after he lost a job as a geophysicist. He dedicated himself to his hobby of white water rafting and a source of continual annoyance to whitewater rafters was the flip flops they wore, constantly washed away. He designed a prototype sandal which would not leave the foot. The sandal with a heel strap was called Teva (Hebrew for "nature"). The natural sandal held fast even in the most trying of circumstances. The new sporting thongs come in a pretty price and would set you back as much as a pair of moderately priced sports shoes. The Teva success was repeated more recently with Crocs. 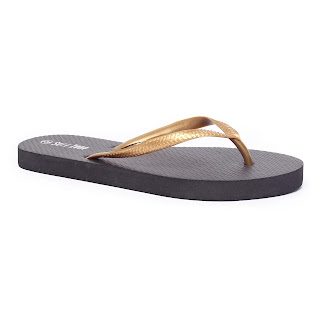 The Melbourne Olympics (1956) was the first televised event and when the Japanese swimming team appeared wearing getas (slip on clogs) prior to competition, the photo opportunity was enough for a clever shoe retailer to start selling jandals to the Kiwis and thongs to the Australians. Now flip flops are a worldwide phenomenon.

Labels: The Origins of Athletic Sandals 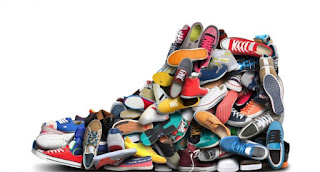 We hit the ground running all the time, but we rarely stop to think about how we got there. Sneakers may seem like a recent invention, but they have a long and interesting history. From 1920s baseball converse to yeezys, our sport shoe design and use has changed a lot! Why are they called sand shoes anyway? Alex of 2SER 70.3 spoke to the Footman, Cameron Kippen from WA to chat about all things sport shoes!
Posted by footalk at 3:25 PM No comments:

Posted by footalk at 9:49 PM No comments:

The use this material is free provided copyright (Cameron Kippen 2019) is acknowledged and reference or link is made to the Sport Shoes website. This material may not be sold, or published in any form without prior permission from the author. All content remains the property of Cameron Kippen and no unathorised use of the material is permitted. If you wish to reference content from the Sport Shoes Blog use the following:Kippen C. 2019 Sport Shoes Blog Retrieved from http://feetandtheolympics.blogspot.com/

Disclaimer: Reliance on information, material, advice, or other linked or recommended resources, received from Cameron Kippen, shall be at your sole risk, and Cameron Kippen assumes no responsibility for any errors, omissions, or damages arising. Users of this website are encouraged to confirm information received with other sources, and to seek local qualified advice if embarking on any actions that could carry personal or organisational liabilities. Please retain this notice on all copies. © cameron kippen 2019.

Cameron Kippen is a shoe historian and retired lecturer in podology. He has no affiliation with soccer organisations, footwear manufacturers, or retailers. The information on this blog has been collected and reported in good faith and wherever possible, from refereed materials. Where triangulation was not possible, information was taken at face value and unless stated otherwise represents the opinions of the author.